Essence of Love in Sufism

For each and every breathing individual life on this planet earth has been revolved around a phenomena i-e “Love”. For each and every Human on this planet earth has own views and own experiences about this thing. The reason why i am trying to show my views in the sense & ideological structure of Sufism is, that when a person’s daily experiences occurs around him/her, all those who have given and using the gift of senses like thinking, realizing, judging our selves in the light of that experience brings up to us a certain level of understanding on the matter. So i will try to reach you through my words and my personal thought about this gift or punishment which is called “LOVE”. 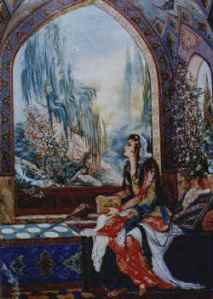 As far as my studies concerns, when we think about this worldly life, good or bad, is somehow and on some stage became worthless. Personally i describe and categories love in 3 different aspects for 3 different mind of sets.

The very first one (Supreme) would be explained later. The materialistic or the worldly relations  and the third one love with humanity or nature are the things which most of the time might became uncertain sometimes. Even became worse than ever and the one feels it like a burden onto us. This is not only because we sometimes consider “attraction” as “love” towards our relation but also sometimes our ego or our conditions and circumstances makes us to make or break that relation or otherwise carry that burden upon our lives.

On the other hand instead of this materialistic love towards someone special became unstable because of our own made problems or negligence from our proper duties whatever cause it is makes it much bitter in time.

The Supreme love , from which i am inspired is the very beautiful thing. I dedicate and consider it valid only for the spiritual happiness which can be only gained through righteous attitude and proper life style.

However! God or Allah in itself is a dominant and full presentation of the word Love in all and true sense. An atheist which does not believe in God, usually do not think that “we” have a soul which a spook type of a thing, our whole scientific research is not yet able to even gives us a little bit of information about “Our Own Soul”. 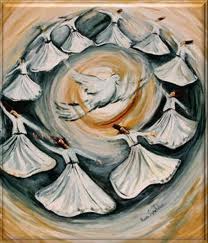 But on the other hand religions (specially monotheist) gave a proper sense and a little much answer to the soul “the unseen phenomena” in our own bodies. This thing “soul” has numerous explanations according to numerous ideologies from the ancient era up to this modern era. So the soul also needs its energies like a processor needs alternative current to display in its all functions.

Love is a biggest food to the soul, this Supreme love which should be only for Allah Almighty and His beloved ones like Adam,Abraham,Moses,Jesus,David,Muhammad and their true lovers (Allah’s blessings upon them all). All things which are in this world could be ended sooner or later. The all remaining thing is the Creator who made all this illusion for us to judge us and gave us ability to spend our lives whatever way we want, is it right or is it wrong?. This is totally given to the Humans hand. Our doings in this world will make our place in the next coming world. For atheists i think and i have a question that! “What? If! what you believes in became wrong and what if! your all life without the thought of truth became useless and answerable in front of your LORD?”. I mean to say, if i am not having belief in God the One and True God, and i spent my miserable life days in preaching that there is no such kind of thing named by God and that gives me a way to do those things which are considering sinful acts to our human race, and one day on my death bed when i will be laid down waiting for putting off my last breaths those sins which i committed in my whole life makes me feel more painful what will be the way to burden off from that?.

But, on the other hand if i am having a faith in any dimension atleast i will try to not to harm others and try to maintain my own way of life good or bad (but for me not bad for others). This thing Faith in God will atleast gave me a relief of assistance and submission to the will of Almighty and considering a little bit relief from my pains of thoughts. So! in short what i mean to say is that this belief in God makes me to love.

So one Sufi poet said:

For years, to the red wine, my heart was bound
The Tavern became alive with my prayer and my sound.
See the Old Magi’s goodness, with us, the drunks,
Saw whatever we did, in everyone beauty had found.
Wash away all our knowledge with red wine,
Firmaments, themselves, the knowing minds hound.
Seek that from idols, O knowing heart,
Said the one whose insights, his knowledge crowned.
My heart, like a compass, goes round and round,
I’m lost in that circle, with foot firmly on the ground.
Minstrel did what he did from pain of Love,
Lashes of wise-of-the-world in their bloody tears have drowned.
With joy my heart bloomed, like that flower by the stream
Under the shade of that tall spruce, myself, I found.
My colorful wise Master, in my dealings with the black robes,
My meanness checked and bound, else my stories would astound.

Why pious people always try to get rid of this worldly life?. Sufism says this all so called “reality” is by itself the biggest illusion. Its like a shadow which will left us alone one day like shadow lost when the light turns off. The soul never dies but the bodies can.

So, Love for Allah or God is ever lasting. Because the Creator is everlasting. The candle burns till end but does not make argue why is it be burned, but its burning is giving light to the people. Just like that the love burns us.

If the burning is because of worldly loves, it is useless, because this body will end one day but if the love is from the soul and its way is towards the Supreme power which Muslims named Allah, and others in their respective languages. ie Almighty God. our candles (life) will be burned(developed, illuminated) with the proper Noor (Light) which will gave benefit of enlightenment of the society will be having a cause.

And what a human can made because of Love of that Almighty Our Lord , lets see what Rumi has to say about it in one of his poetry

I’ve again and again grown like grass
I have experienced seven hundred and seventy moulds
I died from minerality and became vegetable
And from vegetativeness ! died and became animal
I died from animaility and became man
Then why fear disappearance through death?
Next time I shall die
Bringing forth wings and feathers like angels
After that soaring higher than angels
What you cannot imagine I shall be that

Life without cause is useless, its a thing like living dead. I spend and still spending my life dedicated to the studies of Sufism and Mystics always brings me to this concept that really this world and everything around us is only an illusion of sights, its like a living hell where your soul is bound to giving examinations until your last breath has been taken off. Like an internet connection disconnected from main ISP. We are bound to fulfill desires, duties and all other burdens. But when we try to concentrate on us we will find that among these examinations the true love (SUPREME) is the way which can not make us dry.

My love of the person will end or might became ended because of mistakes and the person will left me. But if i am loving that Creator who makes me, while accepting all tough life dogmas and prohibitions, will be not ended because the God is endless so why dont i try to gain Love of Almighty which is everlasting which not even left human alone in life hereafter.

Bcz! studying very much You became a Learned Man

But You never try to learn your innerself

You always try to went to Mandir,Masjid (churches temples etc)

But You never went in your heart or yourself

You always try to fight with Satan!

But you never try to fight with yourself

You dont know Him(God) who is sitting inside Yourself

When we came in this world think sometime that why a child cry when the birth takes place, but when we left this world, we are emotionless and died, and others cry. Our existence in this world is not for everlasting period. Its examination hall and we all are students in it. Someone is cheating, someone is sincere , someone is trying to bribe, someone is taking sinful actions,someone is committing crime etc etc.

The study of Quran reflects the true dimensions for the proper way of spending life and the best example which is given by Quran is the way of Our beloved Prophet Muhammad (peace be upon him). Not only Prophet of ISLAM but also there are numerous examples given by Holy Quran, like example of Noah, example of Abraham, example of Moses,Jesus,David,Solomon etc etc.

Sufism’s essence of love is Love for the Lord One and Only One True God, that power which is regulating all things around us and still giving us time to think to repent to dismiss to not believe to believe and all other emotions and senses. every one insist that we are right and other religions are wrong, but Sufism the mystic give us a way in form of Love, Love which is not Muslim phenomena neither western or eastern. Its universal thing and Sufism tells us that look whatever religion faith and creed you might have had, consider yourself first as a human then we (Sufis and Muslims) choose the way of ISLAM good for us because of its all rules and regulations which are good and beneficiary for the human kind, So you might have differences in opinions but we do not have differences in humanity. After all we all are humans and we have same physical physique  and same bodies same emotions less or more. Let us come close together in the thought of love and in the essence of love towards that supreme power which we Muslims called Allah and others called God.

In last i would say the Love is also having one meaning and that is God. Our cultures, our traditions and other differences are on their stands but we are humans first, so my if i am loving the Almighty

God, then probably i will not hate other humans and this love’s fragments will spread. May God bless us all the senses of humanity and true love with the wisdom and enlightenment of soul.What is your thinking of Love (specially the Supreme one)?