Imam Ibn Hajr al-Makki al-Haythmi al-Shafi’i wrote in refutation of Khateeb Baghdadi: (Chapter XXXIX:) Embed it in your mind that Maqsad of Khateeb was only to compile the sayings just like Historians gather all sayings about Imam (Abu Hanifa) according to their habit. Khateeb’s Maqsad is not to revile Imam Abu Hanifa nor to lower his status. The proof of this is that Khateeb has mentioned those people “WHO PRAISED IMAM ABU HANIFA” before showing negative viewpoints and he has “Written more before (i.e. Tadil is superseding Jirah)” and most of the Ahlul-Manaqib have relied upon Khateeb on “Merits of Imam (which he has mentioned before)” However after this Khateeb has mentioned sayings of Mukhalifeen so that it is clear that Imam (Abu Hanifa) was amongst those (great) people who have not been spared by the tongues of Hasideen and Ignorant folk!

Another proof is that the chains which Khatib has used in which there is insult of Imam, then most of them are “DISPUTED UPON AND MAJHOOL” We should remember that such Isnaad cannot be permissible to use against Izzat of a Muslim, Plus there is foul language used for which there is no “IJMA” Hence how could it be Jaiz to use foul language against one of the (great) Imams. Shaykh ul Islam Imam Taqi Ibn Daqiq al-Eid has said: The Izzat of people are just like pits of hell fire and on it’s side are standing leaders and Muhaditheen (i.e. if they bash ulama then they will fall into the pit).

Even if we assume to be correct what Khateeb has mentioned from “INSULTERS” then still it is not worthy of taken reliable because the negative viewpoint if it does not come from people who are his followers then it definitely comes from people who are Muqalideen of his enemies who have written against him. Even if someone is from the same era of Imam Abu Hanifa still his accusation will not be valid because It has been mentioned before that aqwaal of people from same era is not acceptable regarding one another. Imam Dhahabi (rah) and Imam Ibn Hajr have explained this in detail and have said that: If it is proven that certain Jirah comes due to “ENVY OR OPPOSITION OF MADHAB” (then it is not accepted atall) because nobody is saved from “Hasad” except for one whom Allah saves. Imam Dhahabi has said: I have not seen such a time when people have remained safe from Hasad except for the time of Prophets and Sidiqeen [Khayrat al-Hisan Page No. 49]

NOTE: That which is mentioned in some books of Mukhalifeen regarding Imam of Imams, Siraj of Ummah the Greatest Imam (Imam al Azam) Abu Hanifa (rah), It is not acceptable by any means because Tadil of Imam Abu Hanifa is clear like a bright day. Regarding Jirah then Jirah of some Muhaditheen is “Mubaham (vague and unacceptable)” and Jirah of some is envious or extreme. Such Jirah as compared to Tadil is not acceptable at all. 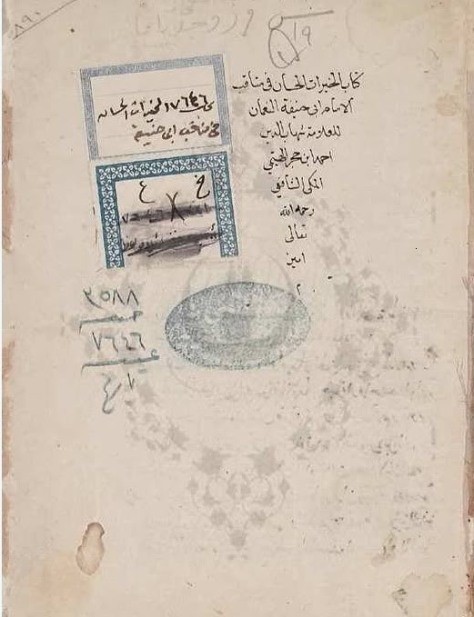 This scan is been updated on 9:48 [@ by admin 2 zarbehaq on 15/2/2014]
This explains the higher status of Imam al azam (rd) because he was among the third blessed generation, who learned directly from Sahaba (companions) (rd). And about whom all literature has beautiful exposure. While Deviant Wahhabis always use foul language against this famous ‘Tabi’e’.